RE Museum - How does a giant airliner lift itself into the air?

A Boeing 747 'jumbo jet' fully loaded with fuel and some 500 passengers weighs more than 350 tons. Yet it can take to the air and fly. How does it take off and stay up? 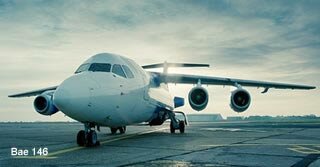 The key lies in the cross-sectional shape of the wings, which are rounded at the front, fairly flat underneath, curved on top, and tapered sharply to a point at the rear.

This shape is known as an aerofoil, or airfoil, and it enables the plane to lift itself off the ground. The wings push the air aside as they move forward, and as the air passes over the curved top surface, it speeds up. When air moves faster, its pressure drops, and the wing tends to lift.
Lift and weight are two of the major opposing forces acting on an aeroplane in flight. The other two are thrust - the forward force produced by its engines and drag - the air resistance it encounters.

Lift is also influenced by the angle at which the wings meet the airstream. Planes are designed so that their wings are inclined at a small angle - called the angle of attack - in level flight.

As a plane flies slower and slower, its height can be maintained by raising the nose and angling the wings more and more into the airstream, increasing the angle of attack. But if the angle is increased to more than about 15 degrees, the smooth air flow over the wings breaks down, lift is lost, and the plane stalls. The speed at which this happens is called the stalling speed.

As an aeroplane's weight directly opposes its lift, it is vital to make the plane as light as possible, but this must be done without sacrificing strength. A light but strong airframe is produced by constructing it in aluminium alloys. Carbon fibre materials are also being increasingly used.

RE Museum Aviation & Air Transport through the ages